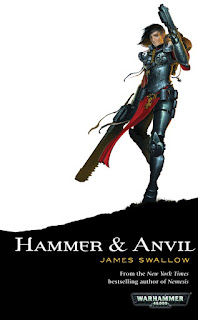 So the last few Black Library books I have read haven't been the best, so I was a little apprehensive about this one, but I was worrying for nothing. Hammer & Anvil was one of the best books I have read in a while.

This book takes place following the events of Faith & Fire (that came out almost six years ago!) and again follows Battle Sister Miriya and Hospitallar Verity.  This time they are sent to reconsecrate the destroyed bastion on Sanctuary 101. For those of you in the know, you know that this was the first time that the Imperium had contact with the Necrons.

With the Necron codex still fresh, this book was a great one to publish about the same time, and if anyone wonders whether or not the BL authors have advanced knowledge of what will be in the codex, this book proves it.
This is pretty much a very large fluff section for Codex: Necrons. While we don't see the Stormlord, he is mentioned and one of his minions is the main antagonist. In this book we get some really good descriptions of just about everything in the codex. The only thing I don't remember seeing was the Necron fighters. This book does a really good job of re-emphisising the fact that the Necron codex and been redone with more a more characterful army in mind. These soul-less robots now have egos and goals. It is great!


About the only thing I would say that is wrong with the book is the old hackneyed standby of what I like to call, "own worst enemy." In just about every BL novel, you have the man antagonist, whether it be Chaos, or Xenos, but there is also the Imperiums own worst enemy, itself. It usually takes the form of a corrupt General that is screwing things up. In this case it is the Mechanicum that is trying learn more about the Necrons and don't give a damn if every battle sister dies so that they get this information.

If you can get past this tired cliche, the story is excellent. The action is great, the characters are awesome (although all of the combat situations Verity gets herself into stretches reason in a few places), and it is a really good book.

I give Hammer & Anvil four consecrated Bolteres out of five.

Posted by Student Teacher at 12:00 PM

Count Down to War Games Con