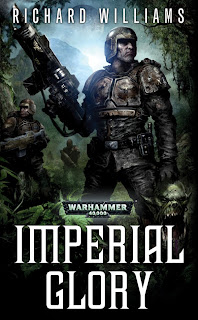 So I dropped the ball by putting a place holder in my schedule and then not actually writing an article. Sorry, my bad.

Anywho, Imperial Glory is another Imperial Guard story. The problem in, my head is that pretty much any Imperial Guard story not set in a city seems to remind me of some of the old Vietnam-era movies such as Apocalypse Now or Platoon, or whatever, and this book is no exceptions. It reminded me a bit of Siege of Firebase Gloria. Now that is not to say that this is a bad think. This book is very good.

This story centers around Major Stanhope and Lieutenant Carson of the 11th Brimlock Consolidated Regiment. Consolidated because the Bromlock had been fighting for 20 years. Only the best of the best are left, and most of them have been been killed leaving only the elite of the elite (like most Guard armies you see on the tabletop now-a-days, all veterans).

Both Stanhope and Carson have their demons (or should I say Daemons) and they have been thrust together for one last fight. They are sent to Voor to deal with a small Ork infestation, and as always there is good news and bad news. The good news is that when the Ork Rok flew into the atmosphere, the thrusters (or would that be thrustas) that were supposed to slow down the Rok failed and all of the Orks died on impact. The bad news is that if you know anything about Orks, you know that just killing them isn't enough to make sure they don't come back.

The Brimlock is sent to the remote island where the rock landed and starts making its way through the forest towards the Orks. They set up a walled camp every so often, and they venture out in the day to cut a road to get the armored vehicles through, and retreat to the camp each night. Every so often, they pick up the camp and move it to the next location. Believe it or not they get attacked while they are at the camp a la Siege of Firebase Gloria.

This story is very good in that there are many characters thrown in from the regiment, and the author does an excellent job of making each of them characterful. The battles are dramatic and pretty much the oppostie of bloodless for the guard unit. The guys may be vets, but they die just like any other humie.

In the end, the story does not have a happy end, but what guard story ever does. But it is a realistic ending, and it is very well done. I think this may be one of the best guard books I have read in a long time.

I give this book five savage Orks out of five.
Posted by Student Teacher at 12:00 PM

Count Down to War Games Con